This is my post for Day 6 of the 15 Habits of Great Writers challenge. 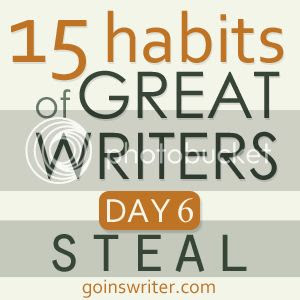 
Find a quote or a painting or some form of inspiration — and steal it. Make it your own. Attribute it — give credit where it’s due — but don’t be afraid to use it. Let someone else’s work springboard you into your own.


Give up on your pursuit of originality and genius and just find something that inspires you. Borrow from your friends and heroes and mash it all up into something that looks, feels, and sounds like you.


So let’s hear from you: What’s something you’ve stolen recently? Where did you find the inspiration?"

I don't know if this is what is intended by today's challenge, but I often use art to inspire the stories I write. For example, a beautiful drawing of a sad mermaid inspired me to write a sad mermaid story to match the picture (picture not shown).  And a sculpture of a wood sprite inspired a story about one.

I also read a lot of vampire, fairy and werewolf fiction which is why vampires, fairies and werewolves (along with other mythical and paranormal creatures) turn up so frequently in my writing. I'm sure that I draw on knowledge gleaned while reading these stories in order to write my own. It's impossible not to.

It was only after I wrote most of a YA novel of mine about a girl who can see through dimensions and has to fight creatures that come through to her dimension that I started to notice the similarities in the story to the show "Buffy the Vampire Slayer." In no way is it the same story; however, my main character is a girl who fights all sorts of creatures and demons, she has a group of friends who help her and she frequently has to save the world, even though she is just a youthful teenager. (That's pretty much where the similarities end though.)

I think it is virtually impossible to not have the things we read and watch on tv or at the movies influence our imaginaton when we write. And that isn't a bad thing. As long as our stories are still our own and are written in our own voices, as long as we don't take too much from what we read and watch, then we can let our imaginations play with the inspiration we gather from it all.