I entered another flash fiction contest. This one is by Anna Meade from Yearning for Wonderland. Anna has some "fairytaleish" pins and the challenge for this contest is to write a short story inspired by one of the Faerytaleish pins (300 words or less) and post in on my blog.

Here is the picture I chose to write a story for, originally pinned by Heather Sutherlin. 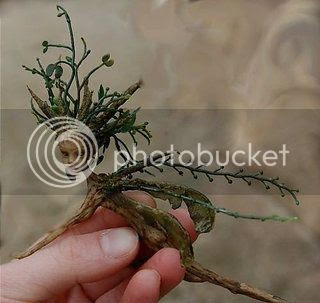 
The cold seeped into my bones, making my teeth chatter. I pulled my coat tighter around me and continued to walk. My campsite was around here somewhere. I had just intended to take a short, refreshing walk through the woods, but I must have traveled further than I meant to as I was having difficulty finding my way back. I wasn’t worried though. I knew if I kept walking in this general direction, I’d find the campsite again.
A movement to my right caught my eye. Something on the tree had moved. I stepped closer to get a better look. At first, I thought the tiny wooden stick with leaves on it that twitched slightly as I neared was just one of those stick insects I’d seen on a nature program once.
But then a tiny little face turned towards me, with eyes that sparked with intelligence, and I realized that I was very wrong. It had a vaguely humanoid body and tiny leaf-like wings. I somehow knew it was female. Her eyes were almond-shaped. I could hear a faint hum coming from her; it had a musical quality to it, a haunting but unfamiliar melody that felt as though it was moving through me.
When her face turned towards me, I looked into her eyes and I couldn’t look away.  Thoughts and images poured into my brain as if being projected there; the life and vibrancy of the forest around me filled me with warmth and knowledge. I was filled with purpose and knew that this forest and all of the life in it had to be protected.
She flew away, but her message stayed with me. I knew that my brief encounter with this magical creature had forever altered and expanded my view of the world.

Tweet
If you have a Wordpress blog, here is the proper code:

My powers came to me very suddenly.
I took my three kids with me to the park while walking the dog for his evening walk. After a few minutes, Jasper, our collie, stopped suddenly, his body completely still as he stared forward at something I couldn’t see. The fur on his back slowly started to rise until it stood straight up and a low growl emanated from him. The kids didn’t notice any of this and skipped right past us, unaware anything was wrong.
That was the first time Jasper spoke to me, although I didn’t realize it was him at the time.
“Danger!” a decidedly male voice shouted in my head, and I instinctually heeded it.
“Katie, Callum, Jenny, get back here!” I shouted as I ran towards them. I didn’t know what the danger was, only that there was something dangerous ahead.
As I got close enough to my children to pull them close to me, three men came around the corner. Their eyes were deep red. Their skin was pale and I definitely glimpsed fangs on one of them. Of course, back then, I thought vampires were just fictional characters in books, so I had no idea what I was actually looking at. I didn’t need to know what they were to sense that they were dangerous.
Jasper was standing beside us, hackles raised, that low menacing growl still emanating from him, and I heard again, “Dangerous! Must protect!” (Dogs think in very simple terms.)
The vampires were looking at my children hungrily and moving towards us purposefully. That’s when my first shapeshifting occurred. The shapeshifting was almost seamless. One minute, I was noticing claws sprouting from my fingers and the next I was on all four, covered in fur, feeling powerful and very angry.
I pounced on the vampire closest to me, and with one bite, I crushed his skull. He disintegrated then and there.  I kept my cubs, I mean, my kids behind me and used a paw to strike out at one of the remaining  two vampires. I was pretty powerful in lioness form, judging by the five feet I knocked him back.
Jasper was biting the leg of the other vampire, shouting, “Kill! Kill!” I told him to let go, and he did. The two vampires immediately took the reprieve to get up and run away. My animal instinct made me desperately want to chase them, but I had my kids to protect so I stayed where I was.
My children were excited, having seen my transformation and stroked my back all the way home. We probably got some strange stares from people on that walk home, three kids and a dog walking beside a lion. Once home, I changed back into myself.
I thought that this was my new reality and accepted it. But then one day Katy, my oldest, turned herself into a cat right in front of me and I knew that we were all in for a crazy adventure.

Lucky 7 Meme - from "Thinning of the Veil" 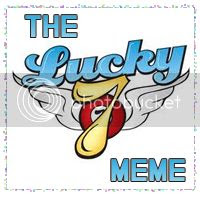 I've been selected for another Lucky 7 Meme, and as I am currently working on several different novels, I can pick and choose which ones I share for this one. Meg McNulty in her blog From Darcy to Dionysus is the lovely lady who tagged me.

How does it work?
I'm sharing 7 lines from "Thinning of the Veil," one of my current works-in-progress.


She had a very large volume in front of her.  The pages were yellowed with age and the binding was an old, weathered leather with very intricate patterns scrolled all over it.
“According to this, there is a veil between our world and the worlds of other dimensions.  Usually, no one on either side can see or feel anything from the other side of the veil.  Some people have a natural born gift for sensing things on the other side though, which is where we get mediums, clairvoyants and others like them.  There are places where the veil is thinner, and that’s where we get ghost stories from.  Where the veil is thinner, people sometimes glimpse things from the other side, from one or another of many different dimensions.”

I'm going to copy Meg's method of choosing the lucky 7 who I will pass this along to by choosing friends from the #ouatwriting and #storycraft conversations on Twitter.

This is my entry into the Form & Genre Challenge #14 at Write Anything. The challenge was to write a 1,500 word story in the first person point of view. This was a departure from the usual for me as I normally write in third person. I have to say that I enjoyed writing this though. I hope you enjoy reading it! Please leave a comment below and let me know what you think. And if you like my story, please vote for it when the voting is open! 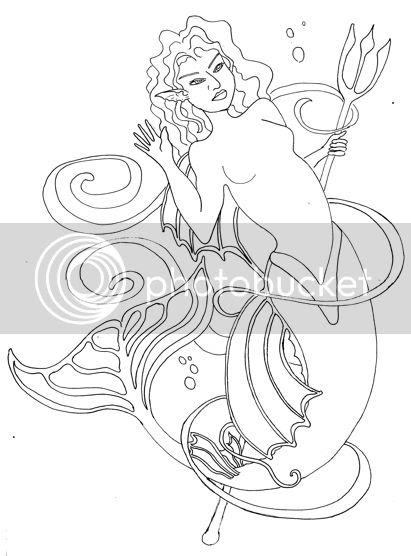 Call of the Siren

Once Upon a Time Anthology 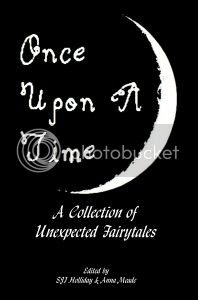 My flash fiction story "The Guardian" and Robert's flash fiction story "What Daddy Doesn't Know Won't Hurt Him" will be available in an anthology of Unexpected Fairytales along with 88 other stories! It will be available as a print book or ebook! It will hopefully be ready in time to coincide with National Flash Fiction Day on 16th May (when the WINNERS of the contest these stories were entered into will also be announced).

These stories were all contest entries for the Once Upon a Time flash fiction contest of Unexpected Fairytales, hosted by Anna Meade from Yearning for Wonderland and Susi Holliday from SJI Holliday. They had 88 entries into the contest, and, with the inclusion of their own stories, that will make 90 stories for the anthology.

I have had a read through all of the stories in the competition, and I thought all of them were fantastic works of fiction that used fabulous wordplay and wonderfully creative imagination. Some of the stories were remakes of old fairytales with a twist, one was written as a poem, and some were completely new fairytales.

I will be sure to announce when the book is available for purchase, and I hope that you will go out and buy one!