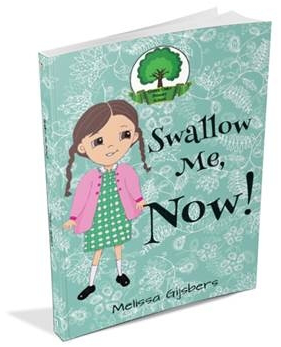 There's only a week left of my friend Melissa Gijsbers's crowdfunding campaign for her new kids book "Swallow Me, NOW!" It's aimed at kids aged 9-12 and is about a girl who is dealing with a new school, a new country, and a new bully. If anyone would like to support it by pledging and/or sharing, that would be awesome.

She's aiming for a book launch on 25 October in Oakleigh, Victoria, but with only one week left and still only half-way there, she's going to need all of our help.

Here's the information she has posted on the crowdfunding page about the book:


"The story of the project
‘Swallow Me, NOW!’ is the story of Samantha Phillips, a ten year old kid in grade 5 who relocates back to Australia after spending three years in Nepal. On her first day she meets Felicity, the most popular girl at Green Oaks Primary School, who bullies her, first with exclusion, and then escalating to teasing. The story tells the tale of how Sam overcomes the bullies and builds her confidence to find some new friends.
‘Swallow Me, NOW!’ was written during the 2013 Chapter Book Challenge, and draws on my own experiences as a missionary kid adjusting back to life in Australia in the 1980s. I found it very hard to make friends and was bullied, mostly due to differences in experiences, but also due to a lack of confidence.
My younger son partly inspired the ending to ‘Swallow Me, NOW!’ after one incident. The teacher was reading a story about bullying where the bully and victim became best friends at the end of the book. He told me that he just wanted the bully to stop and that he didn’t want to be friends. Looking in to other stories that were available, I found similar endings, or that the bully got in trouble and changed their ways.
The other aspect I noticed was that many stories were trying to get children to solve the issue of bullying by themselves. With my story, I want to encourage children to tell someone if they or someone they know, are being bullied. They may be able to come up with a solution, however they should do this with the support of the adults around them.
My goal with this book is to give children an understanding of bullying as well as encouraging them to speak up if it’s happening to them or someone they know."

The part highlighted in red is highlighted by me to point out that, not only is this a book about bullies, intended to help kids through their own bullying problems, but it was also written during ChaBooCha!

A $6 donation helps her reach her goal and also gets you an e-book copy of the book once it's published. If you want to donate more, there is an option to buy a copy for yourself and have a second copy donated to a local school library.