Ever Lost by Melissa MacVicar - Review and Exerpt #Giveaway 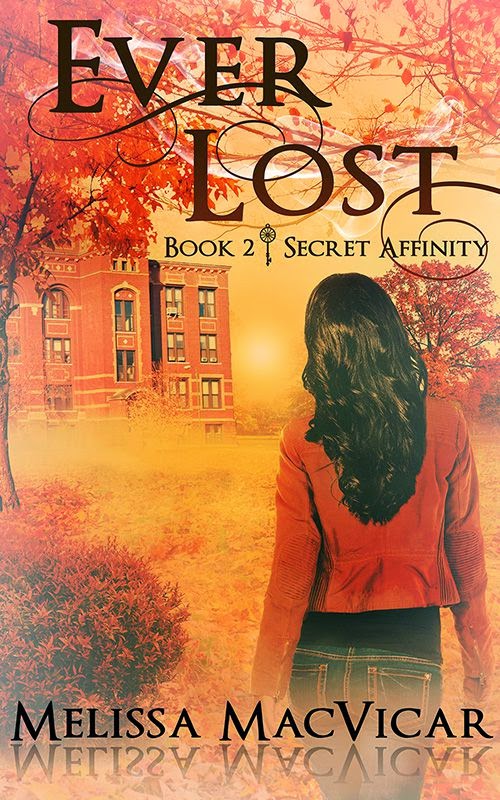 I had the pleasure of getting to read Melissa MacVicar's book, "Ever Lost" in order to review it. It's book to in the "Secret Affinity" series, and I haven't read book one, but the book did well as a stand-alone book anyway.

Here's the blurb from Amazon:

Jade has a dedicated boyfriend, an overprotective mom, and a full scholarship. Uprooted from Nantucket, Jade is installed off-island at her dad’s new house so she can attend snobby Layton Academy. Leaving Charlie behind is sheer torment, but living with her father has plenty of dangerous distraction—in the form of a terrifying spirit haunting her new school. Hottie classmate Mateo Fernandez can’t see the ghost, but he knows its story. He’d like to know hers, too, but Jade still misses Charlie, even though distance seems to be changing him.

With support from Mateo and the mysterious Noemie, Jade commits to helping the agonized spirit cross over. As she delves into the ghost’s past, the disturbing secrets Jade learns draw her into a deadly confrontation with a desperate man. If she can’t play his demented game, the spirit’s harrowing fate could become her own.


I really enjoyed the book. It's well-written and not full of distracting spelling or grammar errors. The story is gripping and intriguing and kept me reading it from start to finish in one sitting. I liked the newest romantic interest and the dynamics between the main character Jade, her boyfriend Charlie and the new boy Mateo were very realistic.

The only thing I didn't like was the sexual nature of her relationship with her boyfriend, being that she is a character of such a young age. I know, realistically, that these relationships do occur, but as a mother of pre-teen and teenage daughters, I just think they see enough of these dynamics in media today and they really don't need it in stories too. But that's a personal preference, and it didn't really detract from the story.

I also have to mention the cover. It's beautiful, isn't it?

Overall, I would give this book 4 1/2 stars, but since Amazon doesn't do half-stars, I'll have to give it five stars when I add my review there. It is a novel deserving of a positive ranking though, so I'm happy to do so.


Here are the links where the book is available:


Win prizes through the Rafflecopter give-away!