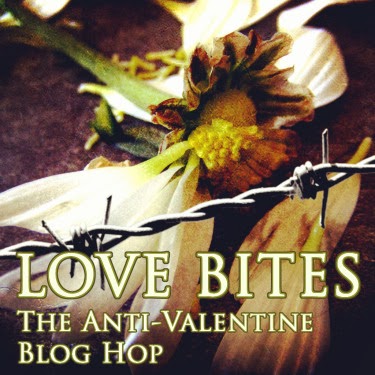 This is a quickly-written flash fiction piece I have written for the Love Bites: The Anti-Valentine Blog Hop.

Read the other entries here: http://40somethingundomesticateddevil.blogspot.co.uk/2014/02/love-bites-anti-valentine-blog-hop-2014.html

Joni checked her lipstick one more time in the mirror just before leaving. It was bright red, a colour that she rarely wore, but tonight was special and she wanted to look her most glamorous.

Jenny and Clara hadn't believed it when Dustin walked over to their table and asked her out. They were the ones who always got the attention from hot guys. Joni was always the one being left out. But the guy they'd all been making surreptitious glances at, hoping he'd look their way had wanted Joni, not model-perfect Jenny and not exotically beautiful Clara, but Joni.

She straightened her cherry red dress, grabbed her keys and left for the restaurant. She didn't really know much about him, other than that the intense look he'd given her as he asked her out had made a warm feeling spread through her.

Arriving at the restaurant, Joni hesitated. This place wasn't the classy restaurant she had expected. She'd followed the directions and found it was fairly far outside of town. It looked a little dim and dingy to her eyes. Maybe he'd chosen this place because of the food.

Shaking off her misgivings, Joni entered the restaurant, looking forward to seeing Dustin. This was one Valentine's Day that she wouldn't have to spend alone. She spotted him as soon as she entered. He was sitting at a table near the door and he stood up when he noticed her.

"Please, take a seat," he put his arm on the small of her back, gently guiding her to her seat at the table across from him. "I'm so glad you could make it." His voice was husky and deep and it sent little excited shivers through her.

Joni noticed other girls like her in the room at various tables with their dates. They all seemed a little on the plain side. Many of them were as petite or even tinier than Joni. Their dates were all as attractive and virile looking as Dustin. That's when she felt the first flutter in her stomach that suggested something wasn't right. The men all looked at their dates in a way that brought to Jodi's mind her neighbor's dog when the neighbor went out overnight and forgot to feed it. Their look was hungry.
"Umm, I think, I think I need to go use the ladies’ room," Jodi hesitated over her words. Surely her gut feeling couldn't be right. There wasn't anything sinister going on here, but her instincts were screaming at her to get out, and she intended to follow her instincts.

"You go ahead and order for both of us," she smiled. "I'll be right back." She speed-walked to the restroom. Yes! The window was large enough to climb out.

The next morning, after a good night's sleep, Joni was watching the news. It didn't surprise her at all to find out that the restaurant she'd ditched Dustin at was in the news. It did surprise her to find out that the women at the restaurant were found half-eaten. The whole scene had been a massacre. No men were among the victims. The authorities were saying it appeared as though a pack of wolves had attacked.

Joni's mind turned back to the sight of the men in the restaurant, looking hungrily at the women who sat at the tables with them. She shuddered. It really wasn't so bad spending Valentine's Day alone after all. 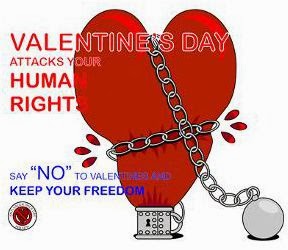 Yikes! Great story. Like the pack of wolves imagery. Glad she got out of there!

Enjoyed this a lot. Like the pack of wolves imagery. Glad she got out of there!

Oh, I like this! Very creepy, kept me wondering all the way through, and I'm so glad Joni got away. :-)

Oh, I like this! Kept me wondering all the way through, and I'm so glad Joni didn't get eaten. :-)

(My apologies if this is a repeat comment. The first one seemed to fail)

Yay! Joni got away! Like her 6th sense for trouble. A fantastic, visual feast of a story. xx

Nice work! Love the understated way you drop in the horror...

Never ignore that inner voice! Fab story! Great imagery and I had no idea what they were going to do - it was NOT what I had expected! Wonderful writing.