Book Blast for "Confronting the Demon" by Ciara Ballintyne plus Review 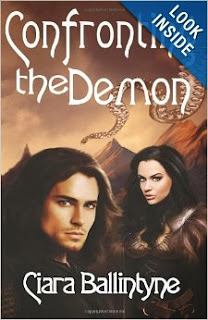 The gates to hell are thrown wide when Alloran is betrayed by his best friend, Ladanyon, and framed for forbidden magic. He is hunted by the guards and the wizards both, tormented by the gruesome murder of his friends and loved ones, and crippled by fear for the living. Now Alloran    must face his demons, or damn the woman he loves.

When a lethal spell is stolen from a locked and warded room, Avram must hunt down the thief before the song of power buries a city of innocents beneath a thousand tons of ice.


My Review of the Book

Alloran is wrongly accused of a terrible crime and being stalked by a former friend who has been driven insane through the use of dark magic and influenced by jealousy. Can Alloran clear his name, save the woman he loves and keep the city safe? (You'll have to read the book to find out!)

I absolutely loved the book. It is in my favorite genre and the pace is quick. You learn enough about Alloran from the very first page to start rooting for him, and, as the bodies start turning up, the suspense heats up along with them.

My only complaint is that it's too short! I read it in about an hour (I'm a fairly fast reader though), and I was sad when it ended because I didn't want to leave the world Ciara Ballintyne had created. I will definitely be reading any other books written by her in the future!

Ciara Ballintyne was born in 1981 in Sydney, Australia, where she lives with her husband, two daughters, one masochistic cat, and one cat with a god complex. She holds degrees in law and accounting, and has been a practising financial services lawyer since 2004. She is both an idealist and a cynic.
She started reading epic fantasy at the age of nine, when she kidnapped Castle of Wizardry by David Eddings from her father. Another two years passed before she began her first attempts at the craft of writing. Confronting the Demon is her debut book.
She enjoys horse-riding, and speculation about taking over the world. If she could choose to be anything it would be a dragon, but instead she shares more in common with Dr. Gregory House of House. M.D.

Ciara Ballintyne will be signing copies of "Confronting the Demon" at the IndieVengeance Day Book Signing in Dallas, Saturday, October 12, 2013 from 1:00 PM to 5:00 PM (CDT). Register for free here if you’re interested to come along - http://www.indievengeanceday.eventbrite.com/.

Oh, I just read this last night and couldn't put it down either! Like you, I wished there was more. It would have made a great novel :)

thanks for the review, and your time. Glad everyone is enjoying it :-)