This is my friend Cecilia Clark's entry in the Creating a Female Superhero Challenge. Go here for details of how you can enter too.

by Cecilia Clark
Word Count 983
Anthology: YES
Charity of choice: Amnesty International (any women's program)
Title: Out of the Blue 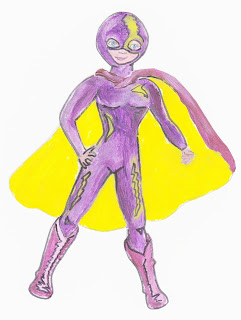 Name of female superhero: Beryllium (made up  by her side kick who is  a nerdy scientist guy. Beryl = blue and  Illium = bone of the upper pelvis and some references to a Tolkien character and berrylium being a rare element)

Costume: Gold and purple skin tight lycra body suit with hood that folds down her face and covers her to her nose tip. Gold and magenta cape.  Magenta boots.

Brief description of how the superheroine gets her powers (i.e. born with them, radioactive accident, mad scientist experiments on her, etc.): developed at onset of puberty with no warning and no explanation why

Powers: so far she had flight, GPS mind, TBA

Anything else important: She is helped by her best friend since preschool, Josh Bellvedere the only son of a wealthy couple. He is super smart, a scientist and is her manager and promoter. She is gradually discovering new powers. Josh enrols her in 3 martial arts, one weapons club, swimming and dance lessons for poise and balance and then enrols her in circus arts. 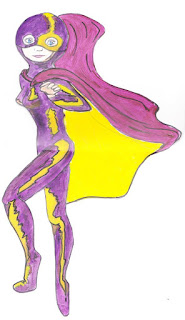 Out of the Blue


“Why am I wearing skin tight lycra, again?” Leslie was shivering in a gold and magenta body suit. She pulled the hood up over her head and down over her eyes, adjusting  it so she could see clearly through the holes.  Her friend Josh handed her the silk lined cape they had sewn together.

“Because Superhero’s need aerodynamic, streamlined clothing” he intoned, slipping into lecture mode in his usual scientific manner, "to move through the elements efficiently, anything else would add drag and resistance to your movement. Now step up on the edge, it's time for your inaugural flight. You know that lycra is double layered to give you plenty of support and protection so the shivering is more to do with fear than temperature.” Josh ran his hands through his sandy red hair.

“Stop that Josh you're making me nervous.” Leslie flipped the cape behind her shoulders and stood poised for the flight. “You are right; I am scared. It is so much higher than all the other trials.”

“This is not a trial run Leslie, I mean Beryllium.”  Leslie rolled her eyes.  “You know you're ready. We have practiced and practiced. You are in peak fitness and ready to go. Stop procrastinating and get going already.” He shoved her firmly in the lower back sending her tumbling into the empty air twenty five stories above the street.

The air rushed into her face so quickly she was unable to draw a breath to scream.

“Come on Leslie, pull up. Get it together. You can do this.” Josh watched her fall and frowned as he repeated a litany of encouragement she was unlikely to hear. He started to chew his lip as she neared the lower floors without change. “Damn it Leslie, you don’t get superpowers to go and waste them on a bit of jitters.” His voice rose to a shout.” Fly, damn you, fly!” And suddenly she was levelling off and turning into an upward arc, her magnificent magenta and purple cape rippling behind her.  “Yes! Yes!” he punched the air and leapt up and down on the spot losing his balance and tripping over the edge of the roof , crazily spinning his arms in a parody of wing flapping as he fell backwards into the empty sky twenty five stories above the street.

“Lesssssssliiiiieeeeeeeeee…” He screamed as he plummeted.

Abruptly his fall was halted. Two strong, slender arms caught him behind his knees and shoulders.
“You sure know how to fall for a girl,” she yelled in his ear as air rushed by them both.  Josh grabbed her across the shoulders and clung on for dear life. “Josh not so hard, you're choking me.” He released his grip minutely but kept his eyes tightly squeezed shut to avoid the view.  “I’ll take you home.” She veered slightly in her flight direction. Josh stiffened in her arms.

“No, you can’t. People will recognise us. Put me down in the park or near a bus stop or something. You’ll never have any private life if they know who you are. Just put me down and go rescue someone.”

“I thought I had rescued someone?” Leslie smirked.

“I can hear you smirking. Now put me down somewhere safe.” Josh scolded with his eyes tight shut.
Leslie gently alighted on a footpath near a bus stop. People waiting for the bus stared with wide open mouths, nudging and pointing. She helped Josh to his feet and he opened his eyes.

“Thank you for saving me, Miss.” Josh put his hand out and Leslie awkwardly shook hands with him. Leslie took a slight hopping step and leapt into the air, she heard Josh telling the bystanders,  “It was amazing! She just came out of the blue and rescued me. She’s a real live superhero.”

Leslie smiled at her self-appointed manager and now promoter. The feel of the cape helped her to adjust her movements to take advantage of the minute shifts in the air currents to propel herself forward.  She soared up into the sky enjoying the drop in temperature after the exertions of catching Josh. He would complain if she flew too high or became too cold but how would he know down there on the ground, catching a bus home. Ordinary everyday Josh, she thought with a twinge of guilt, could keep his nanny nagging to himself.  She settled into a steady pace and flew on and on simply enjoying the flight for its own sake.

She had promised Josh she would do good things with her powers but she was still discovering them. She could fly, that was obvious, but what else.  She was pretty strong, catching and carrying Josh hadn’t been too strenuous and he had insisted she work out every day since they had discovered her ability to fly.  That day  five years ago, they were playing some crazy ball game in the house, just like they had since they were preschoolers  and  had hit his mother’s most  expensive artsy statue.  Leslie had leapt for it, caught it and not landed straight away.  Just like that she had changed from ordinary school girl to freak.

Her muscles starting to tire; it was time to head home but where was she?  Heart racing in panic, her palms grew sweaty then suddenly her mind switched into GPS mode. She knew exactly where she was and how far she had come and how to get home. She blinked her eyes and realised a new power had blossomed in her head.  Josh was going to love this. She had flown over a thousand kilometres without knowing it.  She headed home getting wearier and lower until finally she landed and began to walk.

“I better tell Josh to sew a pocket in this outfit for a phone. It’s his turn to rescue me.”

Ooh, I really like how her mind goes into GPS mode. That could come in really handy sometime!

That story moves at a delightful pace. I love that ending :-)

I enjoyed this, it was nice to be with her as she discovered and honed her skills.

Oh I like this character, and the lovely ending. Her costume looks like it was perfectly built for speed. =)

I like the relationship between her and Josh. And how she discovered her superpowers! And how she is learning about them is great too.

Love this story. I think it was one of my favorites out of all the entries I've read. Good luck in the contest!