This is my husband's submission to the anthology. It is not eligible for the prizes due to his being part of my family, but he wanted to take part anyway. His entry for the Creating a Female Superhero Challenge is called "Divine Light." This is part of a longer story he has been writing for a while now. Find out more about the challenge here. Last chance to enter is at midnight tonight (PST).

Name of human alter ego, if different: Angelica (surname to be added later)

Costume: white outfit and sword, sword is hand-jewelry that transforms into a blade

Brief description of how the superheroine gets her powers (i.e. born with them, radioactive accident, mad scientist experiments on her, etc.): She was an angel born into a human world, but she was mostly unaware of her powers until, as a teenager, the angel Gabriel fully unleashed her powers.

Powers: She is the vengeance of God, wields the Sword of God, super strength, ability to smite, fly, agility, power of an angel, glows, invisibility to humans and more

Anything else important: She has a rough life before finding out her purpose, but came through it without letting her spirit be darkened. She doesn't choose her targets. She is sent after only the ones who are past redemption. 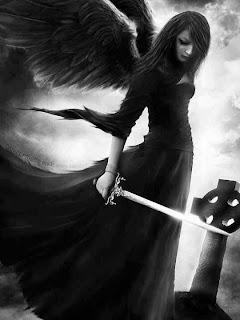 
He watched as she pulled back her arm and then plunged her hand into his chest. He could feel it slice open his ribcage and reach his heart. He felt her pull the heart free, and he stood looking into the eyes of the petite woman in front of him as she presented his still pumping heart to him as if awarding him a trophy. He wouldn't be killing any more innocent women now.

His grip now gone, his hands fell away as he collapsed to his knees and slumped onto his back. His head hit the ground with a clunk. She followed him down resting on her left knee, her arms spread as if to conduct an orchestra.

She watched the life drain from his eyes, then closed hers. From her lips, she spoke the language of the ancients, quoting the words that opened the gates of Hades and ushered the keeper to account.

The air around them cooled and the sun set, the sky darkened and tinged with red - not just as if the sun bounced off the clouds, but colored a hue that changed the very pallets that daylight would paint the world. Sounds muffled as if snow fell but a rumble from the furnaces of hell grew till the dirt around danced to its sound.

Divine looked into the light as the gates opened; her stare never wavered, her resolve complete. From a light that would ignite a human and turn them to dust, a shape appeared. A tiny dot that grew slowly as the creature approached, running as if on four paws, each head appearing to want to lead the charge to the human realm.

“Come on Cerberus, I don’t have all day!” Divine shouted into the abyss at the approaching creature.

The three headed dog almost appeared to have ignored her but the eyes of each narrowed as if annoyed by the contempt in her voice.

Cerberus burst into the world and landed adeptly by her side; one head growled at her while the other two sniffed the air about, either seeking confirmation that they were alone or looking for an opportunity to cause mischief before returning to his home.

The hound then changed shape and metamorphosed into the shape of a man. Taller by a clear two feet than Divine who, at the moment, was crouched over the body. He turned to Divine and with a voice that matched that of his beast self he sneered at her while he spoke.

“How are you, assassin? You been keeping busy, I see?” he growled.

A slight smile crossed the lips of Divine, but still her gaze showed no emotion and she stood up to her full height, flicking her hands out so that all the blood slipped from her fingers and clothes as if they were water repellent.

“I still have enough time to muzzle you, if you like?” she replied, which wiped the sneer from his lips and replaced it with a snarl.

“One day girl, you will be mine. One day, you will slip up and anger your lord, and you will face me as a sinner.” It was almost barked at her, the spit flying from his mouth.

“It would almost be worth it, just to show you how far you can shove your head up your arse, but then with three heads you probably already know that,” she stated.

He stood there, his fists clenching and unclenching and she knew he was weighing up the odds to which he already knew the truth. They were never to battle. They were never to touch; to do so would see the beginning of the end of everything. Yet she loved to goad him. He apparently loved her goading, or he was just really bad at witty conversation.

She pointed at the body at his feet as if to remind him why he was there and after a moment he refocused his attention to the task at hand.

Cerberus closed his eyes and then transformed back into the hell hound he was. All three heads turned to the body and lunged at it, grabbing not the flesh but the soul from within. It tugged and pulled, ripping it from the body that had held it for too few years, ignoring the screams and pleading that emanated from it. Then without looking back, it leapt back into its own realm that closed leaving the alley dark and quiet now the Sun had set.

Divine moved to the body and waved her hand over it as if dismissing it from her mind. Instantly the mortal wound closed, the skin showing no marks to witness the method of execution that had befallen this creature. All signs of her involvement vanished; the blood she had wiped from her arms dissolved into the surface it had soaked into, and the heart folded back into the cage it had belonged.

Divine moved to the unconscious woman who she had rescued by enacting God’s divine justice on the man who had been attacking her.  She placed the tip of her index finger from her left hand onto the woman’s forehead. She lowered her head in prayer and then stepped back and waited. Divine then left to watch the alley from a distance.

Within moments, the woman appeared from the alley, waving frantically at two men who were walking on the other side of the road. They ran to her assistance, and then both ran into the alley behind her, one taking his phone from his pocket.

This is my favorite. Definitely.

Wonderfully dark, yet light! Loved this so much! Definitely keen to read more of Divine...

Wow! Such vivid description. A deliciously dark tale that I absolutely love!!

Oh Loved reading this one, such great description. I could really see this in my head.