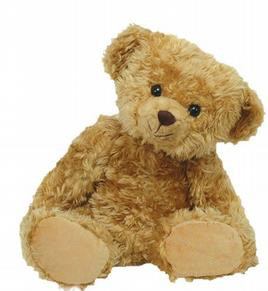 The Teddy Bear
by Rebecca Fyfe

Tina Diggle and her husband James Diggle had always wanted a baby of their own, but they were unable to have one. All of the children on their street adored them, because the two of them were especially kind to children. Sometimes, Mrs. Diggle made gooey chocolate chip cookies for the neighbourhood's kids, and she would often find small toys to give to the children which she knew each one would love. She knew each child on her street by name.

But, no matter how much the children on the street loved her, she still felt a hole in her heart because she couldn't have a child of her own to raise and love. Mr. Diggle knew how sad this made her. A few days before Christmas one year, he bought his wife a cute little tan teddy bear. It was soft and chubby and had a pacifier in its mouth. He knew it was nowhere near the same as having a real baby, but he just wanted to bring something home that might cheer her up, even a tiny bit.

Mrs. Diggle thought the teddy bear was adorable. She decided to name it Connor. She set it under her Christmas tree with some of the Christmas teddy bears and presents.

"I wish you were a real baby," Tina Diggle said to the teddy bear, before leaving to get ready for bed that night.

Connor the teddy bear felt very sad upon hearing her words. He wanted only to be loved by someone and to love that person back. But he couldn't change what he was. He had been a teddy bear all of his life. If he could change himself into the baby that Mrs. Diggle so badly wanted, he would. He sighed as he sat under the tree.

"Why so sad?" asked the Christmas teddy bear beside him.

"I wish I was a real baby, instead of a teddy bear, so that Mrs. Diggle would be happy." The teddy bear sighed again.

"Well then, what are you worrying about? Tonight is Christmas Eve. Santa Claus will be coming, and he always lets us teddy bears have one wish."

"Really? What do you usually wish for?" asked Connor.

"Last year, I wished for a name, and the Diggles gave me one first thing in the morning. They named me Chris. This year, I think I'll wish for my vest to get washed. It's looking a little bit dirty lately."

"Those are very small wishes," Connor said. "What if Santa can only give small wishes? What if my wish is too big?"

"Well, you won't know unless you ask," said Chris matter-of-factly.

Connor tried very hard to stay awake long enough to ask Santa to turn him into a real boy, but, long before Santa ever arrived, Connor fell asleep. 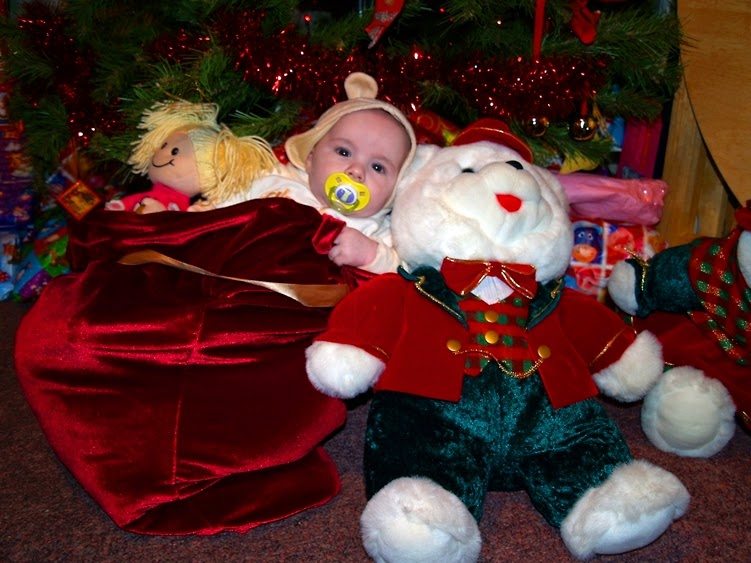 In the morning, Mr. and Mrs. Diggle entered the living room to open their presents. Connor the teddy bear was gone and, in his place, a tiny baby wearing a teddy bear costume slept in a special red Christmas sack.

Mr. and Mrs. Diggle were over-joyed to finally have a baby of their own, and Connor got all the love any former teddy bear could ever hope for and then more.

This story is part of the Story Advent Calendar Blog Hop. Every day from December 1st through December 25th, a variety of authors are providing you with one story to read to your child on the lead-up to Christmas. Check out the posts below to see which one to read to your child tomorrow!
Tweet
Posted by Becky Fyfe at 5:23 AM