Dionne Lister's "Shadows of the Realm" - on sale January 8th!

My friend Dionne Lister's book Shadows of the Realm is going on sale! 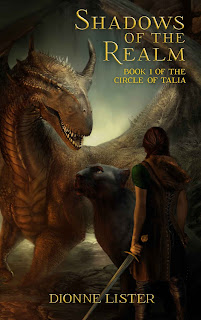 Epic Fantasy Saga, Shadows of the Realm, on Sale Jan 8-22!

Shadows of the Realm is an epic fantasy for teens and adults. Join Bronwyn and Blayke, two young realmists, and their animal companions, as they are forced to leave the only home they’ve every known to undertake a dangerous journey towards Vellonia, city of the dragons.

The gormons are invading, slipping through the corridors between realms, and they want blood, lots of Talian blood. Will the young realmists learn enough of the Second Realm magic to prevail, or will everything they love be destroyed?

The first book in The Circle of Talia series is on sale from the 8th to the 22nd of January for the bargain price of $1.99 on Smashwords and Amazon. Grab it now and escape into an original and enchanting world filled with mystery, danger, dragons and adventure.

Ooo, sounds like a goody! Thanks for letting us know :)

Thanks so much for sharing, Becky. You are awesome!