Malcolm McDonough is a a friend of mine and we keep in touch over Facebook. He is a 45 year old dad and author living in Australia. He has a very creative personality and a terrific sense of humor! 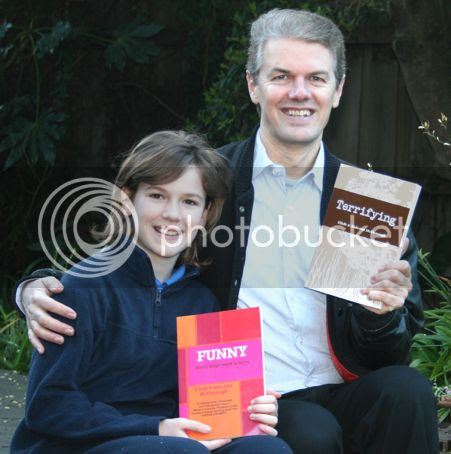 About: I live in Melbourne with my partner and five children. I was born in Melbourne, but have also lived in London and Glasgow. I love travelling and have visited over 60 countries. You can learn a little about me from my new Google+ profile.

Writing accomplishments? I started writing professionally in an ad agency when I was 17. In the following 20+ years I wrote everything from four-word billboards to brochures, websites and TV commercials. My work won a few local awards and I was a finalist in some national and international awards too. Once, a campaign I wrote was chosen from a national competition to promote an Australian tour by His Holiness the Dalai Lama of Tibet. I’m not Buddhist, but it was still an honour to meet him at his Melbourne appearance.

What type of writing do you do? What genre do you write in? I now write full-time for my local government. My title in my day job is ‘Writer’ but it involves informative writing mostly, rather than creative writing. I have to write as clearly and concisely as possible, which I think is a good practice for most kinds of writing. My personal writing is mainly t-shirt slogans, with a focus on pregnancy and families. Just recently, my daughter and I co-wrote two tongue-in-cheek books. I would classify them as ‘ridiculous’ if that’s a genre. If it isn’t, I guess we just invented it.

When did you first realize you wanted to be a writer? What was it about writing that drew you to it? When I was a kid I often wrote silly poems or songs for my friends. One friend said I should get a job writing jingles and I immediately thought, “Yes, that’s what I’ll do.” Since writing was something I enjoyed doing, it seemed like an ideal career.

Where do you get your ideas for your writing? You know how sometimes a conversation moves so fast that later you think “I wish I had said…”? Rather than waste those thoughts, I make a note of them to turn into a t-shirt slogan or a headline.

What books/authors have influenced your writing? I love the way Bill Bryson makes even the most technical subjects engaging. Now that my kids are reading a lot, I’m also rediscovering Enid Blyton, J.K. Rowling and Tolkien.

What are your current writing projects? Apart from my day job, I continually write slogans, product descriptions and tweets for my pregnancy announcement websites:
• Pregnant By Design
• Materni-Tee
• PregnancyNews

I also write posts for two Facebook pages to promote the books I recently co-wrote with my daughter:
• Totally Funny
• Terrifying

Do you ever experience writer’s block? How do you get through it? Once my daughter and I had the idea for our books, the words came very easy. So writer’s block was never an issue. But then, they are very silly books ;-)

With serious projects I am happy to write then revise. So even if I’m feeling less than 100% motivated, I just start writing.

What do you love most about writing? There’s no enforced down-time when you’re a writer. I love being able to write, or at least create and clarify my ideas, any time, anywhere.

If you could become one of your characters for a day, would you? (and who/why?) I’m sure it would inspire a lot of pregnancy slogans if I was actually pregnant for a day! But to be honest, I’m not sure I’m cut out for it. Luckily I’ve been able to share five pregnancies with my inspirational partner.

Do you have any advice for other writers? Don’t be shy. It’s so easy to blog, tweet or self-publish these days. There’s no reason not to share your writing with the world. Plus, you’ll get to know so many wonderful and creative people in the process (Yes, I’m looking at you Rebecca).

Great interview Rebecca & Malcolm!!! I enjoyed it a lot!!! It was a great focus on his writing career - past, present & future :) I'm going to link to it too :)

Thanks so much for the interview Rebecca :-) Eilidh and I were thrilled to see it online.
Thanks Barbara too, for offering to link to it. That's such a good idea I think I'll link to it too.

PS: Until 7 October you can save 15% on our books 'FUNNY' and 'Terrifying' with the coupon code TANGOAU305 - what good timing!