This is my entry for the Creating a Female Superhero Challenge. It's ineligible for the competition, but I thought I'd put something here to give everyone an idea of the format. Details for the competition and the anthology can be found here.  This was just a quickly done entry, so I plan on writing a more thought-out one later. but I hope this gives you an idea of how it should be presented on your blog post. 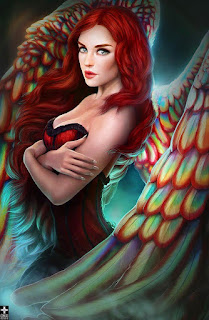 Human alter ego appearance (if she has an alter ego): long, curly red hair tied up in a high and tight ponytail, freckles, green eyes, short, slightly plump and curvy, has large, wings that are a combination of brown, orange, red and white, wears the costume described below

Costume: black leather trousers, form-fitting but not too snug, and a black leather vest-type of shirt with an open back that just has ties across it to makes room for her wings, a small leather eye-mask across her eyes to help hide her identity.

Personality: feisty, temperamental, tries to hide her insecurities by acting brazen, has a soft side but tries to hide it, impulsive, adventurous

Brief description of how the superheroine gets her powers (i.e. born with them, radioactive accident, mad scientist experiments on her, etc.): She has a very clever friend create a chemical that will alter her DNA.

Anything else important: Her friend Camryn is a genius when it comes to manipulating DNA and working with chemicals. Camryn is a superheroine in her own right. Kelly and Camryn are best friends and fiercely loyal to one another.


Kelly looked in the small tube of liquid. This was going to change things. No more being afraid. No more waiting to be saved. Once she drank this liquid down, she’d be able to save herself. She held the bottle up to her lips.

“Kelly, you can’t just drink it,” Camryn reached out her hand as if to stop her. “We haven’t tested it on human subjects yet.”

Kelly didn’t hestitate. She downed the beaker of liquid in one swallow. “Too late now, Cam.”

Camryn, already used to Kelly’s impulsiveness from the years of friendship they’d spent together, just shrugged. They would find out if it worked or not, and if not, she’d work on something to counteract it.

“That was stupid, Kelly. What if it has really awful side effects?”

“That’s what you’re here for, Cam. You’ll figure out how to fix it if it goes wrong. You’re good at this science-y stuff.”

Camryn looked her best friend over. Kelly’s long, fiery red hair matched her impulsive and feisty temper, but the smattering of freckles across her nose and cheeks made her look deceptively soft. Kelly was wearing jeans and a white peasant blouse. Her body was a little on the plump side, but instead of looking overweight, she just seemed curvy in a way that guys drooled over. Cam envied Kelly’s confidence with the opposite sex.

But no matter how much Kelly appeared to have it all, Kelly hadn’t been happy for a long time, which is kind of what had brought them to this moment. Kelly's brother had been the victim of a brutal attack last year. Although he had survived the attack, Kelly had hated not being able to help him. She had hated that feeling of helplessness. Instead of retreating into herself, the way Camryn knew she herself would have, Kelly had let herself grow angry.

And when the newest super villain had snatched her as his hostage just a few short months ago, leaving Kelly to be rescued by their local superhero, the Bullet, Kelly had become even more enraged. Kelly had explained to Camryn how much she wanted to be able to fight back and not have to wait around for someone to save her every time something like this happened.

It had been three years since the first true superhero had shown up in the world. And since then, the number of superheroes had grown. The problem was that the superheroes had been followed by the appearance of supervillains , to the point where all sorts of disasters and evil plots were having to be diverted on a daily basis.

Camryn may not have Kelly’s looks or charisma, but Camryn was smart, really smart. And Kelly had devised a plan which involved Camryn’s knowledge of chemicals and DNA manipulation.  Camryn was proud of the fact that, once Kelly had set her to her task, it had taken her a mere 53 days to come up with the chemical that could alter a person’s genetics, giving them a mutation that would, hopefully, make the person stronger.

Of course, mutations could do other things, Camryn started to worry. Genetic make-up was so unique to each person that there was no way to know what form the mutation could take. Kelly could wind up with an extra set of eyes or turning into some sort-of lizard-human mutant. But Kelly knew the risks. Camryn had been clear with her from the beginning that this was really just a crapshoot.

Camryn looked at Kelly again. So far, nothing had changed about her friend’s appearance, but was anything happening on the inside?  “How are you feeling, Kel?”

“I don’t think anything’s happening. Are you sure you gave me the right tube?”

“You’re changing!” Camryn was trembling, whether from excitement or fear, she wasn’t sure.

Kelly cried out in pain. “Cam, something’s wrong! I feel like I’m being ripped apart from the inside.” She started panting and curled up on the floor. “Make it stop!”

“I can’t!” Camryn was really worried. What if the chemical compound she’d created killed her best friend?
Kelly started screaming as her skin, in two long lines along her back, started to peel back, blood pouring down from the open wounds. She continued screaming as Camryn watched something growing from those broken and ripped apart lines of blood and flesh.

When it was over, Kelly lay passed out on the floor, lying in a large pool of blood. Camryn put two fingers against Kelly’s neck, checking for a pulse and, surprisingly, found a strong one.  She reached a hand tentatively out to touch one large wing. The feathers were real. It was real. How could this be? She knew some of the physical mutations could end up being visible, but wings?  Covered in blood, with her clothes torn and her red curls falling riotously over her face, Kelly looked like an avenging angel.  What have I done?
Posted by Becky Fyfe at 3:58 AM

This was fantastic! The biochemist nerd in me loved the genetic engineering angle:) Nice twist with your mc, Kelly, having been saved by a superhero herself, search for a way to become one. This is a great idea and for a worthy cause!
WriterlySam

Oh that's so clever.. I am never gonna be a match for you girls but I am off to try..

Well done Becky, terrific mutation. :) I am looking forward to reading them all.

Wow, that was great!

This is amazing. I love how you have related the story to there being other supers out there and the villains. I love her attitude in wanting to be strong. With those wings, she is going to be awesome. Great superhero and great story. x

Ah, the impetuous nature of some people. And the unknown consequences. Would be interesting to see how she deals with those wings being big, and visible.

This is a good story! I want to see what happens next. That's the problem with word count limitations. Maybe you'll write more about this in the future? Good Luck in the contest!