My lovely friend Anna Meade is getting married and, in honor of her upcoming nuptials, the Dark Fairy Queen Writerly Bridal Shower was started. This is my contribution. 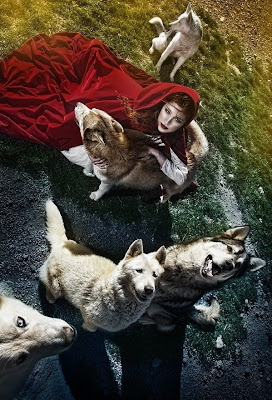 Anna’s red cloak spilled like blood around her shoulders and against the white lace of her wedding dress. Who would have guessed, even just mere months ago, that she would now be married to the one she had once been so afraid of?


She brushed out her long coppery hair, taking one last look in the mirror to make sure she was ready. He would be coming for her tonight. She stepped outside, closing the front door to her grandmother’s cabin behind her.  Grandmother would have approved of the wedding.

The eerie cry of a wolf sounded in the night, and before she could discern the direction it had come from, another howl answered. Within moments, the night was filled with the sounds of wolves howling. The moonlight cast just enough light for her to see movement in the bushes and trees surrounding her. Still, she waited.

The wolves moved in, stepping into the clearing before her, surrounding her on all sides. Their gazes remained unblinkingly on her.  She looked back at them, straightening her shoulders and showing them she was not afraid. They weren’t a danger to her.

Anna held her hand out and the wolf nearest to her came over and licked her hand, then rubbed his head against it. She ran her hands through his thick, course fur and felt nothing but safe. These were her wolves now.

She felt it when he arrived. He moved silently, but some part of her that would always be attuned to him knew when he moved into the clearing. A deep, inky black, this wolf towered over the others. His muscular form maintained twice the weight and height of the other wolves. Black eyes gazed at her patiently, and, as she gazed back, his form started to twist and blur, contorting into odd angles, parts of him shrinking and other parts elongating, bones breaking and reforming at different angles, until her husband stood before her in place of the wolf.

When she’d first met him, in the forest all of those days ago, she’d been afraid.  He had been in human form, but something inside her sensed the wolf behind his eyes. She had run, and he’d shifted and chased her. She thought she had beaten him to her grandmother’s house, but he had been waiting for her, sitting in the kitchen with her grandmother, sipping tea.

Her grandmother had introduced him to her, had explained all about his shape-shifting. Her grandmother had known the pack for many years, well before Anna’s mother had been born. They brought her meat and she sometimes cooked or mended garments for them.  Her cherry pies were a particular favorite with the pack.

Anna had been startled at first, but as his warm eyes regarded her, she felt something move within her. Later, he had gone outside to chop some wood for her grandmother, and Anna had snuck glances at him while he worked, admiring the grace of his body as his muscles contracted and expanded with each swing.

That had been the beginning for them.

And now, he was hers. And his pack was her pack. And on a night like tonight, with the moon full and the stars out, they would run together for the first time. Anna felt something move inside her again, the way it had when she had first gazed into his warm brown eyes while standing in her grandmother’s kitchen.

This time, she felt other things move within her. He reached out to her and held her in his arms as her body shifted and changed reforming into a copper-colored wolf with fierceness in her eyes. Next, he shifted back into his wolf and they led the pack back into the night, running wild and reveling in their freedom.

Grandmother had known the wolves for a very long time.


Wedding Toast: May you both have many years together, full of love, blessings, magic, joy, and miracles.

I really like the imagery you use to describe the movement of the wolves.

Wonderful reworking of the original story, and so fitting! Loved it.

Love your wolves, and especially her transformation at the end! Great reworking of the tale!

So loved and seeing the reactions of others, I am not alone. Forgive me but 'Twilight' sprung in my head with the shapeshifting and your story, but your words and imagery woven surpassed my brief moment of madness :-) That pic you found is Amazing also.